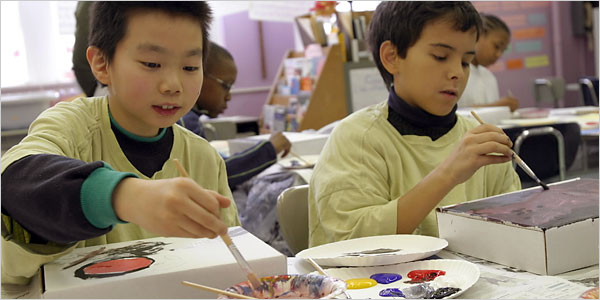 The following are some Everyday Advocacy points on arts education and creativity in the schools that are useful to have in your metaphorical back pocket and slip into conversation with friends, families, neighbors, business leaders, trusty elected officials and so on.

ARTS IN SCHOOLS—It’s the Law
The No Child Left Behind Act’s definition of core academic subjects includes the arts. In case someone wants you to prove it: the definition of core subjects is located in here in Title IX, Part A, Section 9101 (1)(D)(11), This means two things: The arts have equal billing with reading, math, science, and other disciplines; and where federal education spending (including  teacher training) are targeted to “core academic subjects,” the arts may be eligible to receive funds.

ARTS EDUCATION IS EVERYBODY’S BUSINESS
With so many priorities colliding, it’s easy for many to think that  education issues aren’t THEIR issues, especially if they don’t have children or aren’t affected by cuts to school programs.  I gave a talk to a group of Creative Class folks last week (engineers of innovation, entrepreneurs, ad agency folks) and was asked, “why investment in creativity and arts education are important?”

When we investment in a child’s creativity, we invest in expanding literacy: beyond reading and writing, speaking and listening, arts, culture, heritage and humanities heightens our emotional literacy, civic literacy, our global literacy and  goes a long way toward bridging mutual understanding and creating common ground. Who will your neighbors, employees, clients, public be? How informed will their choices be? How will you speak to them?  To paraphrase Emily Dickinson, “the slow fuse of the possible is lit by the Imagination.”  We all hold the spark.

Education fuels culture and culture has everything to do with how we engage with one another, celebrate together, how we problem-solve big issues like education funding, environmental quality and access to arts for all. And here in Portland, we know how to fix things (we did it with transportation, land-use planning, and we can do it with education).  As Benjamin Barber once said, “Imagination is the link to civil society that art and democracy share. When imagination flourishes in the arts, democracy benefits.”

IMPROVED STUDENT ENGAGEMENT & EQUITY
A recent study, Doing Well and Doing Good by Doing Art: The Effects of Education in the Visual and Performing Arts on the Achievements and Values of Young Adults, tracked students from eighth grade through their twenties and found that “arts-engaged” students from low-income families demonstrated greater college-ongoing rates and better grades in college—more specifically, low-income students from arts-rich high schools were more than twice as likely to earn a B.A. as low-income students from arts-poor high schools and students engaged in the arts were more likely to be employed in jobs with long-term career potential and more inclined toward civic engagement (activities like volunteerism and the political/social well-being of their communities).

Numerous studies reveal a connection between the arts and increased student engagement and motivation, including educational aspirations, improved attendance, and a development of respect and appreciation for other people’s views or perspectives—helping students connect more effectively with their peers.

A fantastic example of this is the Center for Arts Education’s report Staying in School, which connects access to arts education and arts experiences with graduation rates.

DOING THE RIGHT THING
When Secretary of Education Arne Duncan recently said it was, “time to rethink and strengthen arts education,” it’s because the American Dream is suffering because our schools are struggling to produce a new generation of dreamers. Rethinking arts education means recognizing the powerful link it creates in shoring up the equity gap for economically disadvantaged students, addressing gaps in 21st Century skills (problem-solving, working in teams, critical thinking, etc.) and enriching lives with meaning and expression.

Polls show that 93 percent of Americans feel that the arts are vital to a well-rounded education for all children. However this significant  declaration of value has not translated into a recalibrated prioritizing of the arts within our public education ecosystem.  The only way this is going to change is by widening the conversation, as The Arts Education Council of Americans for the Arts’ Green Paper suggests, to include local education leaders, the business community, and parents.  Which was really the impetus behind the creation of the Right Brain Initiative

Remember, it’s not always about money, it’s also about our priorities.  Bill Ivey, former head of the NEA frames it perfectly: “if we were to place fresh emphasis on the pursuit of happiness as good public policy we need to identify a set of achievable interventions that can move us ahead, not back. . .if we ask ourselves, ‘what can make the biggest difference in our quality of life for the most people over the longest time for the least expense?’ It would seem that a reworking of our current system to enhance young people’s access to arts, culture and the humanities is an achievable, affordable goal.”

Michael Jonas recently wrote in CommonWealth, “The single biggest challenge facing education reform efforts is taking innovative practices and conditions that show remarkable results in a handful of schools and bringing them to scale.”  Integrated arts education is a perfect example of an “easy yes” and one that can scale as easily. Look no further than the many communities, including our own, that are making it happen.

Another great scaleable strategy is the one that Louisiana just authored into law. In June 2007, the Louisiana Legislature passed a bill which created a statewide mandate for arts education. LA’s Office of Cultural Development/Division of the Arts set as one of its priorities the Imagination, Creativity and Innovation (ICI) initiative. Designed to nurture creativity and advance 21st Century skills, the ICI initiative will be  piloted in a handful of schools across the state starting with the current school year. This is an example of designing a program with a big picture outcome that leads from the inside out. Committed to experiential, and child-centered, arts integrated teaching and learning, the eight schools modeling the program will be an inspirational and aspirational focus for the broader statewide community.  Good ideas like these are worth sharing.

TELLING THE STORY—JUST SO
At The Eduflack blog, Patrick Riccards stresses, “the power of telling an effect story.  Data points are nice, but we really resonate with the personal story.  We like to hear about the real people and the real communities that are affected by real policies and real ideas.  We like to hear about the protagonist, the struggle, and the ultimate victory.  We want the fairy tale, even for issues such as education policy, education research, and school improvement and innovation.”

Hearts and minds is the key.

Tim DuRoche is Director of Programs at the World Affairs Coucil of Oregon, member of The Right Brain Initiative’s Governing Committee, and Chair of Right Brain’s Advocacy Committee.
Read the first part of this series here.