The Right Brain Initiative is proud to celebrate the hard work of its partner and current Facebook Contest participant, the Portland Children’s Museum.

In the spring of 2011, PCM Educator Garrett Riggs worked with Jackson Elementary to explore science through a range of visual mediums. This residency achieved true success through a thoughtful plan and full commitment from teachers, teaching artist, school staff and even parents.

From planning to reflection, all Right Brain residencies are facilitated on-site through our Implementation Partner Young Audiences of Oregon & SW Washington. This chapter of the nation’s leading arts and education organization has enhanced children’s learning throughout the state of Oregon with resources from the arts community since 1958.

Garrett and Jackson staff planned to connect visual art to the study of wetlands. In each of the residency’s sessions, students would use a different visual medium to represent observed objects from nature. The team determined that students through this residency would:
• Increase observational skills
• Increase confidence in working with visual media
• Improve fine motor skills
• Gain a deeper understanding of wetlands environments

From start to finish, here’s how a Right Brain residency works!

Each grade observed different biological species from the wetlands environment. 1st graders began by carefully observing a picture of a flower bud. Garrett taught the students how to use black markers to render accurately what they saw, making their work uniquely expressive and  imaginative.

In the second session with Garrett, 1st graders observed an image of a frog, employed their black-line drawing skills and then learned how to apply water color to their images. Students used their imaginations to place the frog in a suitable habitat as learned in their prior studies of wetlands.

Between the second and third sessions with PCM, 1st grade classrooms at Jackson went on a field trip to a local wetlands. The teachers brought supplies so the students could use their new observational drawing skills.

In the final session with Garrett, students transformed their watercolor paintings into three-dimensional art created with clay.

Back at school, students created a mural of the wetlands in a shared hallway space. Students brought supplies from home or used found objects from the wetlands to contribute to the mural.

The students’ art work from the residency and their hallway mural were shared with parents at the school’s art night.

A 1st grade student from Amy O’Brien’s class with speech delays and a limited vocabulary was particularly sparked by this residency. When asked during a post-residency interview what he learned about frogs, instead of responding verbally, he immediately began drawing. He found ways to share his understanding of a frog’s lifecycle and the wetlands environment through images. The teacher reviewed this drawing following the interview, and was moved by the depth of his communication and recall.

For more photos of the inspiring work the Portland Children’s Museum has done building art back into our schools, check out this flickr set of their residency with Rigler School in NE Portland. 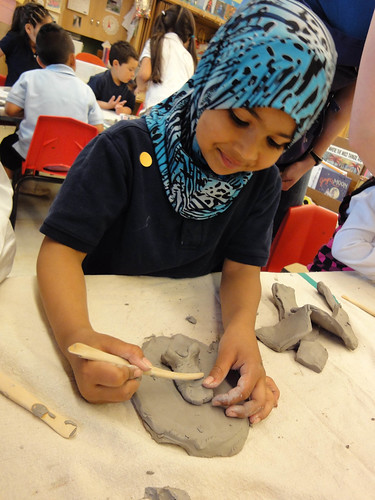 See more photos from this residency by clicking here.

The winner of this week’s Facebook Contest will be announced next week so you still have time to enter at Portland Children’s Museum’s Facebook page.